If you were a kid growing up in the ‘80s during the height of the cola wars chances are you remember the Pepsi challenge. For those of you who may not be familiar, Pepsi went out and set up tables in public areas, covered the soda cans and asked people to pick which one they preferred based on taste. Once the label bias was removed people regularly chose Pepsi based on taste alone. The airways were filled with Coke drinkers shocked they preferred Pepsi.  This is a classic example of implicit bias.

Once the key identifying data is removed the bias is also removed.

One of the hottest topics in Talent Acquisition is AI and the implications for streamlining hiring and the potential for removing bias in hiring  But like Amazon learned AI has the potential to automate and scale bias.  However, according to Brian Uzzi, professor at The Kellogg School of Management at Northwestern University, “We can simply deny the algorithm the information suspected of biasing the outcome, just as they did in the Pepsi Challenge, to ensure that it makes predictions blind to that variable.”

Is it really that simple?

Not quite says Dr. Bobbe Baggio, Associate Provost Graduate Cedar Crest College and Nov Omana, CEO/Founder Collective HR Solutions,  “AI, if not carefully programmed and monitored, has the ability to exasperate inequalities in the workplace, home, legal and judicial systems. Sexism, racism and other unrecognized biases can be built into machine-learning algorithms underlying the intelligence and shape the way people are categorized and addressed. This risks perpetuating an already vicious cycle of bias…The truth is that most of the programming and data analytics are being created globally by white males…has shown that women are less likely than men to be shown ads on Google for executive jobs…these algorithmic flaws are not easy to detect. Ingrained bias could easily be passed on to machine-learning systems and be built into the future.” Removing bias is more than just removing the data; it’s also ensuring that those who are responsible for “setting” the data table are free from implicit bias.

To bring it all back to our cola wars example.  If some of the labels showed or if the people were told ahead of time which can was which the label bias would have perpetuated.

We all have label bias.

And, we all have the ability to create a flawed system.  So what can we do?  The first step starts with each of us. Have you ever measured your own implicit bias? You can test yourself for implicit bias. Take a test here.  Why is this important?  Each of us in our own ways has “tables that we set” everyday and need to be sure that we are not setting that table with our own implicit bias.  For those of us in TA we have an enormous responsibility to constantly check and re-check our own penchant for implicit bias to be sure we are giving everyone a seat at the table and also equal access to those seats.

Learn how JobSync can increase your applicants by 8X! Are companies that didn’t treat their employees well over the last 12 months during the pandemic, going to be held accountable?

What will be the possible fallout? Here we take a step backward to look forward and also look at some companies that seem to be getting it right and what they are doing to ensure they stay competitive to secure the talent they need to succeed. Be A Glass Shattering Organization

Before the pandemic the workplace for women was still a challenge.  Women still making less than men, harassment in the workplace and the ever present glass ceiling. Now throw in a global pandemic, economic downturn and guess what? Women are being forced to leave the workplace in droves.  According to a National Women’s Law Center survey 80% of the people who left the workforce in September of 2020 were women. Did you know Amazon.com’s 1-click payment solution changed more than shopping and has impacted your talent acquisition strategy?
Amazon’s 1-click solution is so powerful because it reduces friction in the shopping experience. Before Amazon invented 1-click payments they had a huge problem with people abandoning their carts. This was their solution. People have become so accustom to 1-click payments that they look for a similar experience in all that they do online. Are You Ready to Re-Imagine Recruiting?

While we are all still wrapping our heads around the impact social distancing has had on every facet of life we now need to start planning for “undistancing” ourselves. Weeks ago, those of us in HR and recruiting were focused on hiring in a job seekers world.  Now, we...

Recruiting highly qualified candidates is one of the biggest challenges growing companies face. Modern recruitment methods are costly and require an abundance of time and attention. One of the most common methods used is job ads. Companies in the midst of hiring for... How To Get The Information You Need From Native Apply Candidates The Truth Behind The Biggest Native Apply Myths

Native apply tools are common but under utilized HR technology. Platforms such as Google, Facebook, LinkedIn, and Indeed have all developed individual native apply tools. Their 1-click application technology has led to the Amazonification of the job search and made it possible for applicants to apply for a new position in a matter of minutes. Take Your Mobile Apply Strategy to the Next Level

Today, the job search and application process takes place on the internet and, specifically, mobile devices.  If you're looking to improve how you recruit and hire new talent, here are a few reasons why you should upgrade your mobile talent acquisition strategy. Fact... 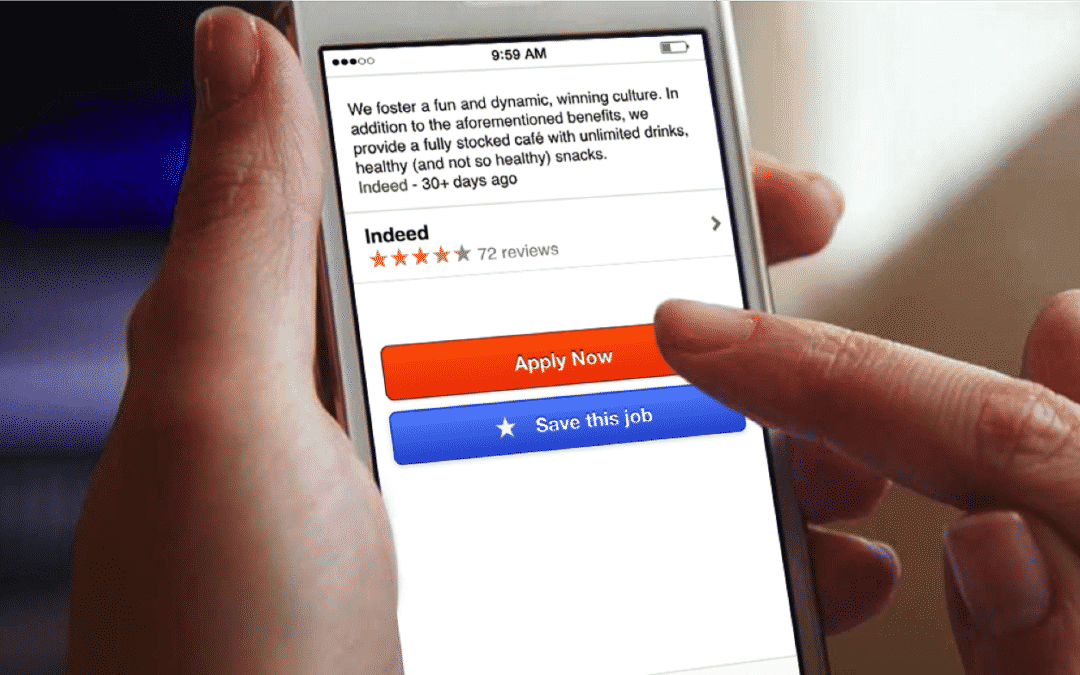 It’s no secret that all search engines use extensive algorithms to determine who gets the top spot in search results. Over $80 Billion is spent on the SEO industry each year, and that statistic only continues to rise. Most business owners only consider SEO when it... One of the most simple ways to improve your performance on Indeed or on many of the platforms out there today is to leverage their native apply tools.  If you are not familiar with native apply it is the apply tools native to a particular platform that provide...

Are companies that didn’t treat their employees well over the last 12 months during the pandemic,...

Be A Glass Shattering Organization

Before the pandemic the workplace for women was still a challenge.  Women making less than men,... "There are increasing stories...of job aggregators distorting the job posting, not digitally...

Did you know Amazon.com's 1-click payment solution changed more than shopping and has impacted...